Is it possible to see powerful auroras during Solar minimum? Thanks to Coronal holes the answer is a resounding yes!

Today I’m going to talk to you about our good friend the Coronal Hole. I’m assuming that because you’re reading a blog about the aurora and likely have a desire to see the aurora borealis yourself, then you will probably know what a coronal hole is? If not, then here’s the science:

The corona is the outer layer of the Sun’s atmosphere which stretches millions of kilometers into space. It is filled with plasma (ionized gas) and despite being the outer layer of the Sun’s atmosphere, it is also its hottest. Sometimes, magnetic fields within the corona split open to create a huge canyon or as we refer to them, a “hole”. These holes can be millions of kilometers long and wide, sometimes stretching half the diameter of the Sun. Once these holes break open, they spew fast-moving streams of solar wind toward Earth. An aurora caused by solar wind from a coronal hole has a much greater chance of being the singing and dancing auroras that we love our guests to see. 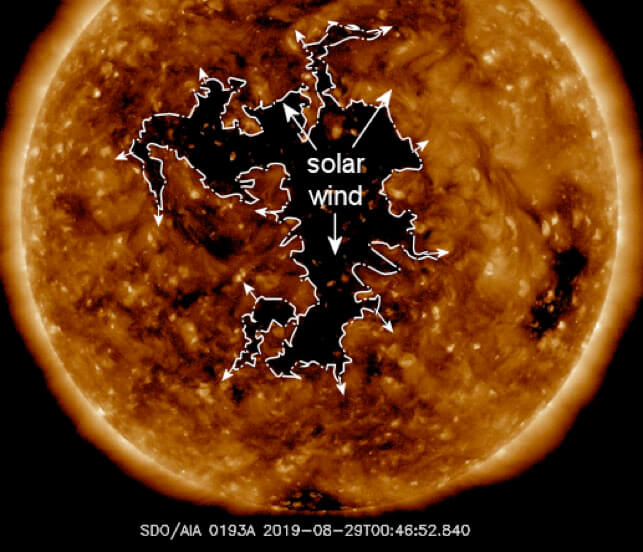 (If you head over to our good friends at SpaceWeather.com then you can see the large coronal hole that opened up towards the end of August.)

Coronal holes happen all the way through the Solar cycle, both maximum and minimum, but during Solar Minimum, the calmer stage of the Solar cycle where we are now, coronal holes are a lot more stable. Which means they can stay open for months at a time. So, every 27 days, as the Sun rotates, we know we will be hit by the fast-moving stream of Solar wind coming out of the coronal hole as long as it remains open.

During Solar minimum, an average of 1-4 coronal holes are open during a calendar month. If this happens we can be confident to have much better chances of seeing G1 class aurora storms, possibly one a week, much higher than relying on the effects of unpredictable Solar flares, which are the driver of auroras during Solar maximum. But add on the chance of a Solar flare or CME occurring at the same time when coupled with a fast-moving Solar wind from a coronal hole then magic will almost certainly happen!

One of the questions which has been commonly asked by aurora hunters in Abisko over the last couple of winter seasons, is: “We’re now in solar minimum so we will have less chance of seeing an aurora?” It’s a logical question, which has been fueled by media articles misinterpreting the effects of Solar minimum. Our guides perspective is this – the 2018/19 aurora season saw the brightest, longest and most powerful auroras that they have seen. That is going back through ten winters spent in Abisko gazing up at the night sky. The surprise about that statement is that we are at the far end of the Solar minimum, still waiting to turn back toward Solar maximum (in theory just around the corner). Solar minimum or not, we are still seeing consistent auroras, and the best have been within the last 12 months! You can see a video which showcases the best auroras of the last two seasons in Abisko below:

To create the aurora we need electronically charged particles, travelling away from the Sun to enter our atmosphere. A coronal hole will cause the Solar wind to travel faster and generally carrying a higher density of particles, therefore bringing more to us. A higher density of these particles creates the bigger aurora storms that we all love to hunt. The other positive of a coronal hole is the magnetic field that has broken away from the corona travels away from the Sun within the Solar wind. When this Solar wind batters against our magnetic field it causes short circuits here on earth allowing the particles to travel further away from the Polar regions, creating widespread auroras and a good show here in Abisko.

A really special aurora that springs to mind is the end of February this year, it was the craziest and brightest our senior guide Oliver Wright has ever seen after 5 years of guiding in Abisko. Looking back through data for that night, we had a density of 8.1, a Solar wind speed of 581 km/sec and a BZ of -5.3. (Without a coronal hole these numbers are a lot lower and a lot weaker.) These were all caused by a coronal hole. It was so amazing we even wrote a blog about it, which you can see here with some real time video footage!

Remember, putting yourself within the Arctic Circle gives you the best chance of seeing the aurora, and using guides with experience of interpreting the data gives you a much better chance of success. Hunting the aurora with Lights Over Lapland here in Abisko will be one of the most memorable trips of your life, but please remember the aurora can and does happen even with out a coronal hole. When you arrive, please don’t feel disheartened if the data isn’t screeching off the charts as we’ve found here in Abisko the aurora can still give a good dance, coronal hole or not.

Now that you know a bit more about coronal holes, head over to our Holiday Packages page and book a trip to come see the northern lights for yourself.